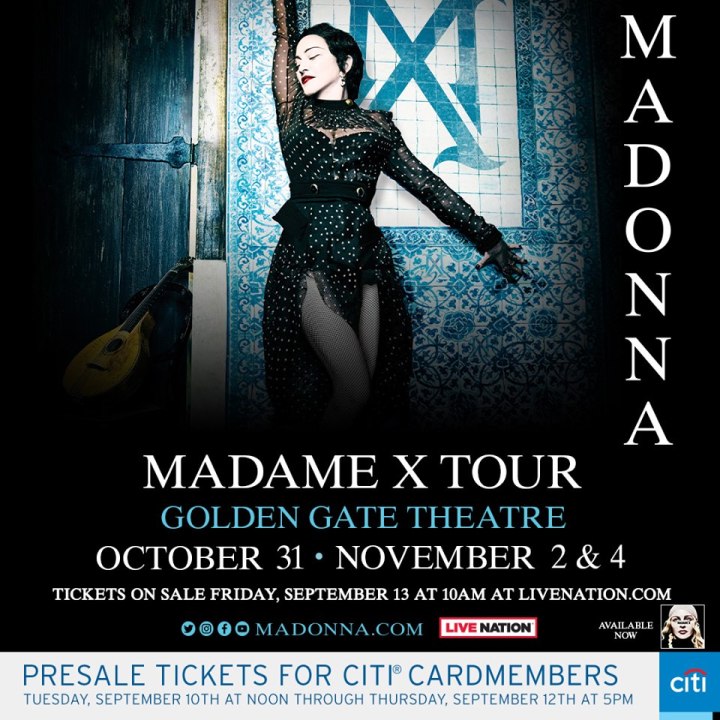 Tickets Go On Sale Starting Friday, September 13 at 10am

San Francisco, CA (September 9, 2019) – Live Nation is pleased to announce that the Madonna Madame X tour has been confirmed for three concerts at the Golden Gate Theatre in San Francisco – October 31, November 2 and November 4. These will be the only area dates and tickets will go on general sale this Friday, September 13th (10am local times) at https://madamex.shnsf.com.

.
ICON is Madonna’s official fan club and Lifetime Legacy members of ICON will be eligible for a special presale for the newly announced dates starting Tuesday, September 10th at 10am through Thursday, September 12th at 5pm. Complete details at: https://www.madonna.com/tour.
.
Citi® is the official credit card of the Madame X tour. As such, Citi cardmembers will have special access to tickets for the additional shows beginning Tuesday, September 10th at 12pm through Thursday, September 12th at 5pm. For complete cardmember details visit www.citientertainment.com.
.
Fans may also access Madame X Tour VIP Packages which may include great ticket locations, exclusive backstage tour, photo opportunity on stage, VIP pre-show reception, limited edition Madonna gift item, fast pass access to designated VIP merch and concessions lanes, and more! . Additionally, fans can access Travel packages which include great ticket locations, exclusive merchandise, plus hotel accommodations and more! Complete VIP, Travel and ticketing information at www.ticketmaster.com.
.
The Madame X Tour will kick off September 17th and include newly announced performances at the Golden Gate Theatre, The Colosseum at Caesars Palace in Las Vegas, The Wiltern in Los Angeles, the Boch Center Wang Theatre in Boston, The Met Philadelphia and at the Fillmore Miami Beach at the Jackie Gleason Theatre in 2019. Madame X Tour continues in 2020 with multipe dates at the Lisbon Coliseum, The London Palladium and Le Grand Rex in Paris.
.
The tour is presented by Live Nation Global Touring.