GALA BENEFITING MUSIC CREATORS AND PROFESSIONALS IN NEED WILL CELEBRATE ITS 30TH MILESTONE ANNIVERSARY ON JAN. 24 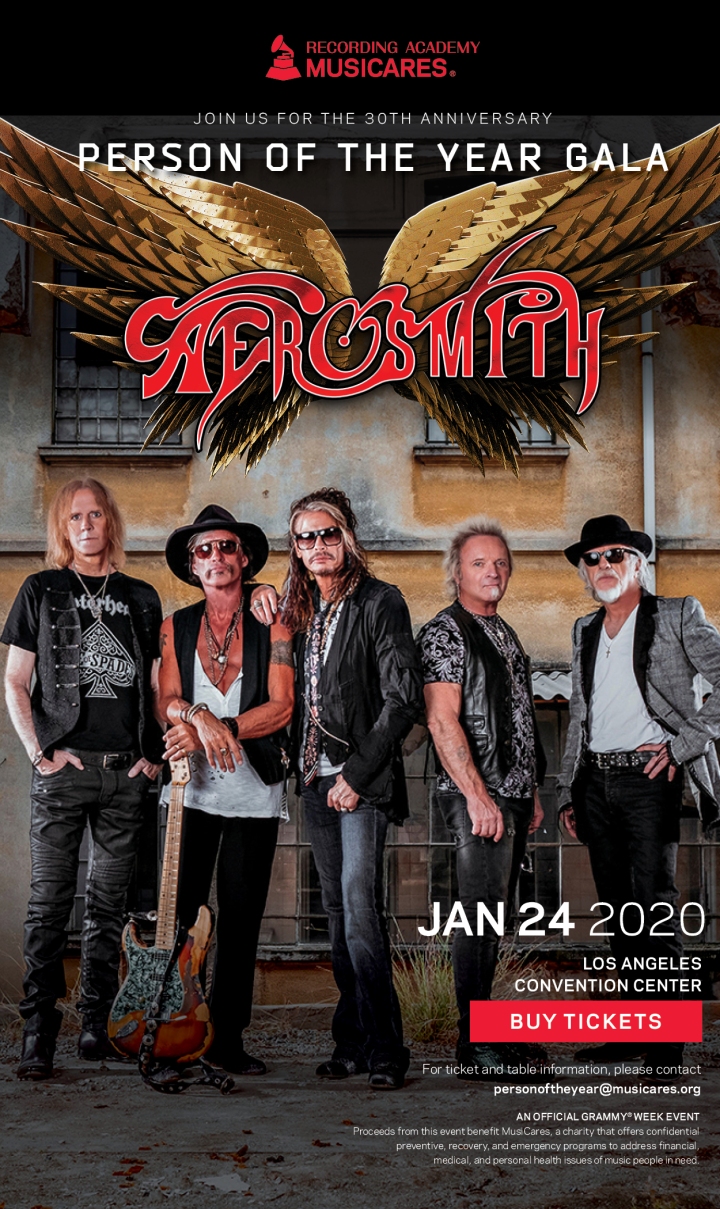 SANTA MONICA, CALIF. (OCT. 4, 2019) — MusiCares® announced today that four-time GRAMMY®–winning band Aerosmith will be honored as the 2020 MusiCares® Person of the Year. The tribute will take place during the 30th Anniversary MusiCares benefit gala, two nights prior to the 62nd Annual GRAMMY Awards® telecast. In the midst of celebrating 50 years as a band, Aerosmith will be recognized for their considerable philanthropic efforts over five decades and undeniable impact on American music history. Over the years, Aerosmith has shown support for a number of charity organizations around the world, including MusiCares and vocalist Steven Tyler’s philanthropic initiative Janie’s Fund, which supports young women who’ve suffered the trauma of abuse and neglect. The band made a surprise announcement about the honor onstage during their Park MGM Las Vegas residency Aerosmith: Deuces Are Wild, on Thursday night. Watch it here.

“MusiCares has been saving lives for 30 years,” said Deborah Dugan, President/CEO of MusiCares and the Recording Academy™. “The Person of the Year gala is the pinnacle of the essential work that MusiCares is doing year-round, and it’s truly magical in the way that it unites and galvanizes our community and inspires others to take action on their own. As we continue to expand our services to people in need, we are thrilled to pay tribute to one of the most beloved bands of all time. Aerosmith has walked the walk when it comes to raising funds to impact music people in recovery. It is sure to be an amazing evening.”

The MusiCares Person of the Year tribute ceremony is one of the most prestigious events held during GRAMMY Week each year. The 30th anniversary benefit gala will begin with a reception and silent auction offering an exclusive and unparalleled selection of luxury items, VIP experiences, and one-of-a-kind celebrity memorabilia for bidding guests. The reception and silent auction will be followed by a gala dinner, a tribute concert featuring renowned musicians and other artists, and the award presentation. Proceeds from the gala will provide essential support for MusiCares initiatives year-round.

GRAMMY Week culminates with the 62nd Annual GRAMMY Awards at STAPLES Center in Los Angeles on Sunday, January 26, 2020. The telecast will be broadcast live on the CBS Television Network at 8 p.m. ET/5 p.m. PT.

Established in 1989 by the Recording Academy, MusiCares provides a safety net of critical assistance for music people in times of need. MusiCares’ services and resources cover a wide range of financial, medical and personal emergencies, and each case is treated with integrity and confidentiality. MusiCares also focuses the resources and attention of the music industry on human service issues that directly influence the health and welfare of the music community.

For more information, please contact MusiCares at 310.392.3777 or   personoftheyear@musicares.org, or visit www.musicares.org.

This is a text widget, which allows you to add text or HTML to your sidebar. You can use them to display text, links, images, HTML, or a combination of these. Edit them in the Widget section of the Customizer.
Loading Comments...
Comment
×
<span>%d</span> bloggers like this: