ANNOUNCES NICE TO MEET YA TOUR 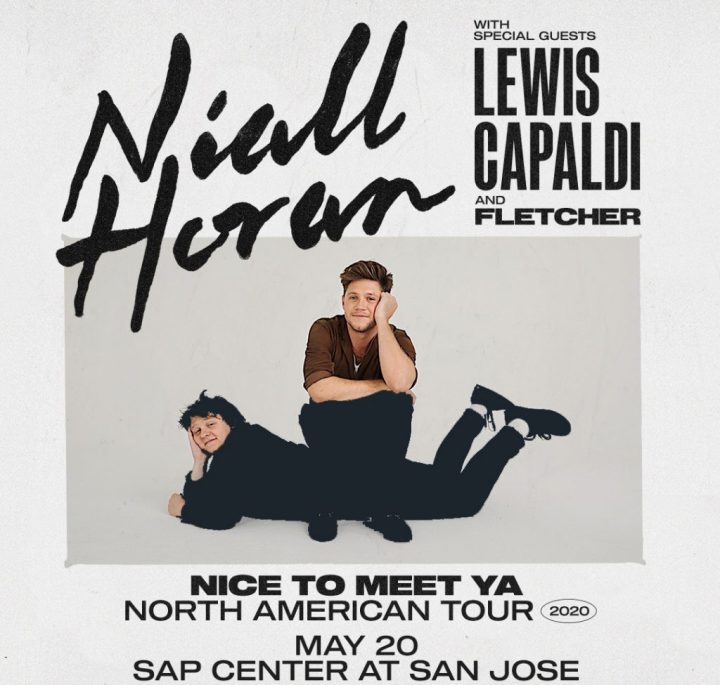 Tickets On Sale Friday, November 8th at 10AM

.
San Francisco, CA (Tuesday, November 5) – Tickets for the first leg of Niall Horan’s Nice To Meet Ya world tour go on sale Friday, November 8th, at 10am. The North American run will kick off on April 20th, 2020 and include a show in San Jose at the SAP Center on Wednesday, May 20th. The tour will include performances by special guest LEWIS CAPALDI plus FLETCHER. Both artists are label mates of Horan. For further details, visit http://www.niallhoran.com. Additional dates, including more North American shows, will be announced soon.
.
Citi is the official presale credit card of the Niall Horan Nice to Meet Ya Tour. As such, Citi cardmembers will have access to purchase presale tickets beginning Wednesday, November 6th, at 10am until Thursday, November 7th, at 10pm through Citi EntertainmentSM. For complete presale details visit www.citientertainment.com.  Reserved seats range from $29.50 to $129.50 plus applicable charges.
.
Online ticket purchases for U.S. shows come with one physical CD copy per ticket order. After ticket purchase, individuals will receive an additional email in the coming weeks with instructions on how to redeem album. U.S. residents only. One CD per online order. Maximum of 4 albums redeemed per household. Not valid for Fan to Fan Resale. Please Note: Not all events will be participating in the album bundle offer.
.
“Nice To Meet Ya“, the first single from Horan’s new album, has already amassed more than 35 million combined global streams. Over 30,000 fans tuned in for the live premiere of the official video and the clip racked up more than 13 million views in the first week of release. View the video, directed by The Young Astronauts, HERE.
.
Rolling Stone praised the “alluring single” and TIME named “Nice To Meet Ya“one of the “5 Best Songs of the Week” upon its release in October. Billboard declared it “Horan’s most daring track yet…”
.
Originally from Mullingar, Ireland, Horan has sold over 80 million records and toured the globe multiple times as part of the iconic One Direction. With his full-length solo debut Flicker (Capitol Records), he achieved massive global success and widespread critical acclaim. The album entered the Billboard 200 at No. 1 in October 2017 and soon earned Platinum certification or greater in 20 countries, including the U.S. In addition to surpassing three million in worldwide album sales and nearly 3.5 billion combined streams worldwide, it topped the iTunes Top Albums chart in 61 countries.
.
Flicker included the 2x Platinum single “This Town,” which has amassed over 800 million streams worldwide, and the 3x Platinum “Slow Hands,” which shot straight to No. 1 in 44 countries, claiming the top spot on Billboard’s Mainstream Top 40 chart for two weeks and surpassing 10 million in adjusted track sales globally with 1.5 billion streams worldwide. Horan’s Flicker World Tour included sold-out dates in the U.S., Canada, U.K., Europe, Singapore, Japan, Brazil and Australia.
.
ABOUT LEWIS CAPALDI
After topping the U.K. Official Singles chart for a nearly unprecedented seven weeks, Lewis Capaldi’s “Someone You Loved” hit No. 1 on the Billboard Hot 100 chart in its 24th consecutive week on the tally and is the first No. 1 single from a debut U.K. artist since February 2016.   Worldwide streams of the track are approaching two billion. Already certified Platinum by the RIAA, “Someone You Loved” has now earned 2.5 million equivalent song units in the U.S. It is certified Platinum or greater in a total of 18 countries.  Capaldi’s debut album,  Divinely Uninspired To A Hellish Extent, is the fastest selling UK debut of 2019 with 90,000 albums sold in the first week. To date, it has sold over 1.5 million adjusted albums worldwide and combined global streams now exceed 2.6 billion.  The 23-year-old Scottish singer-songwriter recently wrapped a sold-out headline tour of North America and his March 2020 tour of the UK and Ireland sold out in mere seconds, making him the first artist in history to sell out arenas prior to the release of a debut album.  Capaldi was hailed as a 2018 Vevo DSCVR Artist To Watch and a 2019 Vevo LIFT Artist, longlisted for the BBC Sound Of 2018 Poll, and won Breakthrough Artist of the Year honors at the Scottish Music Awards. He was nominated for the BRIT Awards Critics’ Choice award and named an MTV UK PUSH Ones To Watch artist.
.
About FLETCHER

FLETCHER’s debut EP – you ruined new york city for me – is out now on Capitol Records.  The EP is a highly personal story of first love and heartbreak and features FLETCHER’s breakout hit Undrunk which has amassed more than 100 million streams worldwide, since earning the #1 spot on Spotify’s Viral Chart. The EP also includes follow up singles,  If Youre Gonna Lie and All Love. FLETCHER made her late-night TV debut on The Tonight Show with Jimmy Fallon with “Undrunk,” which spent several weeks on the Billboard Hot 100. Noted as the fastest rising song at pop radio from a new artist in the last 5 years, she also earned impressive slots on Wango Tango, The iHeartRadio Music Festival and Z100’s upcoming Jingle Ball at Madison Square Garden this year.  FLETCHER has been performing sold out headline tours of both North America and Europe, with sets at Lollapalooza, Bonnaroo, Life is Beautiful, and other prominent festivals already under her belt. The singer-songwriter, who somehow also found time to graduate from NYU’s famed Clive Davis Institute for Recorded Music, has already begun carving out a space for herself in pop music. PAPER states FLETCHER is “one of the most exciting female artists to emerge in pop,” and it’s clear that she has much more to say.