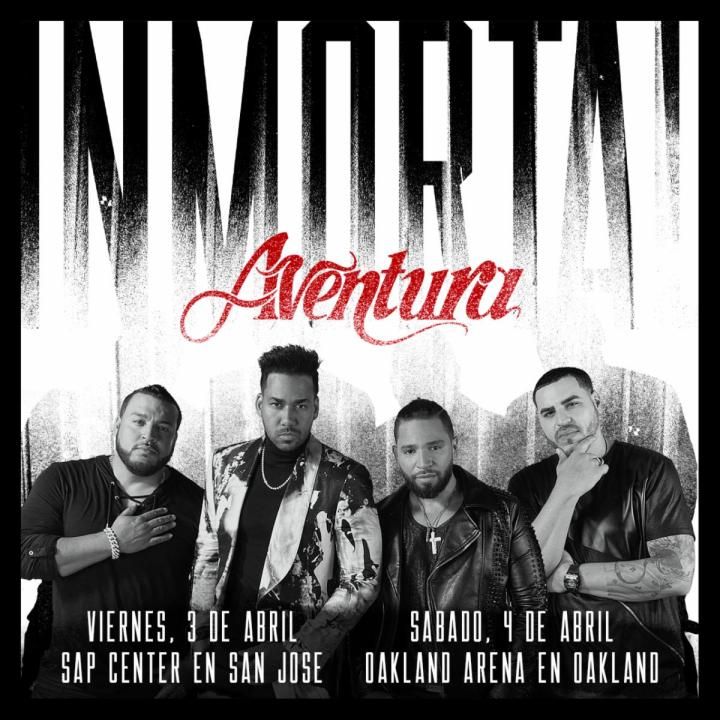 Tickets go on sale Friday, January 31 at 10am at LiveNation.com

San Francisco, CA (January 28, 2020) – Today award-winning bachata superstars Aventura announced their first U.S. tour in over 10 years. As one of the most influential Latin groups of all time, Romeo Santos, Lenny Santos, Henry Santos and Max Agende Santos will bring their exhilarating bachata sound to seven cities in the new year. Produced by Live Nation, the outing will kick off February 6th and include stops at the SAP Center in San Jose on Friday, April 3rd at the Oakland Arena on Saturday, April 4th.

Tickets will go on sale to the general public beginning Friday, January 31st at 10am at LiveNation.com. Citi is the official presale credit card of the tour. As such, Citi cardmembers will have access to purchase presale tickets beginning today at 12pm until Thursday, January 30th at 10pm through Citi EntertainmentSM. For complete presale details visit www.citientertainment.com. Reserved tickets for both Bay Area shows range from $49.50 to $279.50 plus applicable charges.

Aventura’s last run of shows were a string of performances at the United Palace Theater in New York City in 2016. They recently reunited on stage at Romeo Santos’ history making Utopia Concert at MetLife Stadium in September 2019. Earlier this year they released their first new single in 10 years, “Inmortal.” The single debuted at number 5 on the Billboard Hot Latin Songs chart and was just named Billboard’s Tropical Song of the Year, spending a record 18 weeks at #1 on the tropical chart. Their greatest hits album Lo Mejor De Aventura was also the #1 selling tropical album of 2019. In April of this year, Aventura won for Tropical Duo/Group of the Year at the Billboard Latin Music Awards.

Aventura broke into the mainstream with their 2002 hit “Obsesión (featuring Judy Santos)”. The group was integral to the evolution of bachata music and are the pioneers of the modern bachata sound. Aventura released five studio albums in a decade, spawning top 10 hits including “Cuando Volverás”, “Un Beso”, “Mi Corazoncito”, “Los Infieles”, “El Perdedor”,”Por Un Segundo”, “Dile Al Amor”, among others. They have sold out arenas across the U.S. such as the world famous Madison Square Garden. Aventura have been nominated for awards including American Music Awards, the Latin Grammy Awards, Billboard Latin Music Awards, and Premio Lo Nuestro. They are one of the most internationally recognized Latin groups of all time. In 2009, Aventura was the first bachata act to ever perform at the White House, for the 44th President of the United States, Barack Obama.