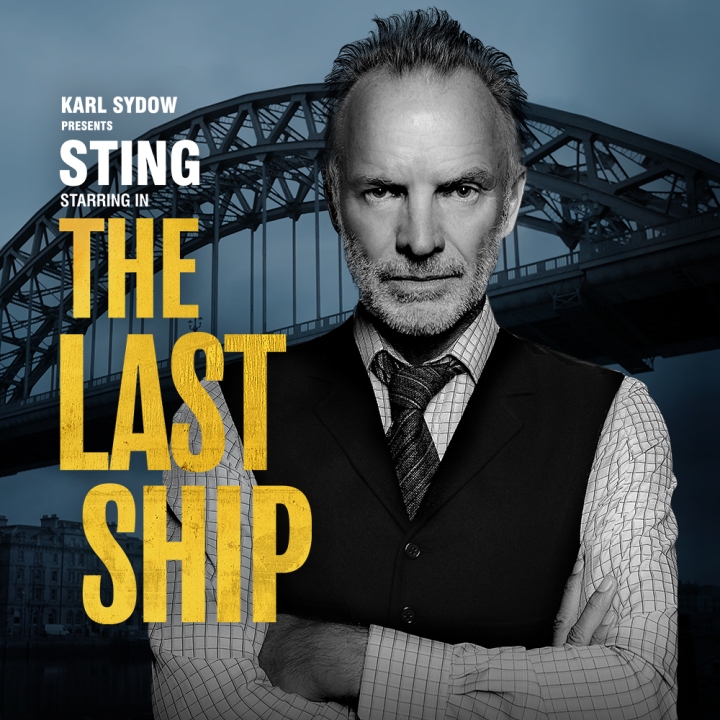 San Francisco, CA (February 24, 2020)—BroadwaySF salutes local union members with an exclusive ticket offer to Sting’s acclaimed musical, The Last Ship, starring and featuring original music and lyrics by 17-time Grammy Award® winner Sting. Set in the shipbuilding town where he was born and raised, the production showcases the strength and resilience of those working in the labor industry. To honor their contributions, members of all creative and labor unions may purchase Mezzanine and Balcony seats using promo code UNION for $64 tickets (Up to 50% off) to attend a performance at select performances. The Last Ship will play at the Golden Gate Theatre from February 20 through March 22, 2020.

Union members can purchase their tickets in advance at broadwaysf.com using promo code UNION or they may purchase tickets in-person at the Golden Gate Theatre Box Office.

Sting stars as shipyard foreman, Jackie White, and will perform the role at every performance.

Inspired by Sting’s 1991 album, “The Soul Cages,” The Last Ship tells the story of Gideon, a prodigal son returning home after 17 years at sea to find that the local shipyard his town was built around is closing and Meg, the love he left behind, has moved on. Tensions flare and picket lines are drawn as foreman Jackie White (Sting) rallies the workers to take over the shipyard and build one last ship in the face of the gathering storm.

A love story, a tale of family and friendship, and a passionate homage to the shipbuilding community Sting grew up in, this “thrilling and stirring musical” (The Guardian) features a Tony-nominated original score by Sting including some of his best-loved songs “Island of Souls,” “All This Time,” and “When We Dance.”

Completely reimagined since its Broadway debut in 2014, The Last Ship has thrilled audiences across the UK and in Toronto and been described as “uplifting, intimate, heart-breaking and universal.” (The Stage.)

The musical is directed by Lorne Campbell, previously artistic director of Northern Stage in Newcastle and recently appointed as artistic director of National Theatre Wales and has set design by the Tony Award-winning 59 Productions, the team behind the video design for the 2012 London Olympic Games.

The Last Ship has a new book by Lorne Campbell and is based on the original book by John Logan and Brian Yorkey, orchestrations by Rob Mathes, musical direction by Richard John, costume design by Molly Einchcomb, movement direction by Lucy Hind, lighting design by Matt Daw and sound design by Sebastian Frost.

The Last Ship is produced by Karl Sydow.

Composer, singer-songwriter, actor, author, and activist Sting was born in Newcastle, England before moving to London in 1977 to form The Police with Stewart Copeland and Andy Summers. The band released five studio albums, earned six GRAMMY Awards® and two Brits, and was inducted into The Rock and Roll Hall of Fame in 2003.

As one of the world’s most distinctive solo artists, Sting has received an additional 11 GRAMMY Awards®, two Brits, a Golden Globe, an Emmy, four Oscar nominations, a TONY nomination, Billboard Magazine’s Century Award, and MusiCares 2004 Person of the Year.  In 2003, he was made a Commander of the Order of the British Empire (CBE) by Queen Elizabeth II for his myriad of contributions to music. Also a member of the Songwriters Hall of Fame, he has received the Kennedy Center Honors, The American Music Award of Merit and The Polar Music Prize. Sting has been awarded Honorary Doctorates of Music by the University of Northumbria (1992), Berklee College of Music (1994), University of Newcastle upon Tyne (2006) and Brown University at its 250th Commencement ceremony (2018).

Throughout his illustrious career, Sting has sold 100 million albums from his combined work with The Police and as a solo artist.

Following his critically-acclaimed album, 57th & 9th, his first rock/pop collection in over a decade, Sting and reggae icon, Shaggy, both managed by the Cherrytree Music Company, released a collaborative, island-influenced album, entitled 44/876, drawing from the many surprising connections at the heart of their music. With its title referencing their home country codes, 44/876 first and foremost honors the duo’s mutual love for Jamaica: Shaggy’s homeland, and the place where Sting penned such classics as The Police’s “Every Breath You Take.” Their chart-topping release debuted at #1 in Germany and Top 10 in the UK. It spent over 20 weeks atop Billboard’s Reggae Album chart in the US, earned Gold certifications in Poland and France and received the GRAMMY Award® for Best Reggae Album.

Last year, Sting was honored at the BMI Pop Awards for his enduring hit single “Every Breath You Take,” which has become the Most Performed Song, with 15 million radio plays, from BMI’s catalog of over 14 million musical works.

Also last year, a new album entitled My Songs, featuring contemporary interpretations of his most celebrated hits, was released and followed by a world tour of the same name. Sting’s ‘My Songs’ World Tour is a dynamic and exuberant show featuring his most beloved songs spanning the 17-time GRAMMY Award® winner’s prolific career with The Police and as a solo artist.

This Spring, Sting will headline a Las Vegas residency, “My Songs,” set to open at The Colosseum at Caesars Palace Friday, May 22, 2020. The show will present a compendium of Sting’s songs with dynamic, visual references to some of his most iconic videos and inspirations.

He has appeared in more than 15 films, executive produced the critically acclaimed A Guide to Recognizing Your Saints, and in 1989 starred in The Threepenny Opera on Broadway.  His most recent theatre project is the Tony®-nominated musical The Last Ship, inspired by his memories of the shipbuilding community of Wallsend in the North East of England where he was born and raised. The show, with music and lyrics by Sting, ran on Broadway in 2014/2015 and completed a UK regional theatre tour which ran from March-July 2018. Thereafter, Sting starred as shipyard foreman Jackie White in the Toronto-based production of The Last Ship at the Princess of Wales Theatre. He reprised the role for productions in Los Angeles at the Ahmanson Theatre (January 14 – February 16, 2020), followed by San Francisco at the Golden Gate Theatre (February 20 – March 22, 2020), Washington, D.C at the National Theatre (March 27-April 5), St. Paul, MN at the Ordway Center (April 8-19), and in Detroit, MI at the Detroit Opera House (April 22-26). Additional information on The Last Ship Tour can be found at www.thelastshipmusical.com

Sting’s support for human rights organizations such as the Rainforest Fund, Amnesty International, and Live Aid mirrors his art in its universal outreach.  Along with wife Trudie Styler, Sting founded the Rainforest Fund in 1989 to protect both the world’s rainforests and the indigenous people living there.  Together they have held 19 benefit concerts to raise funds and awareness for our planet’s endangered resources. Since its inception, the Rainforest Fund has expanded to a network of interconnected organizations working in more than 20 countries over three continents.

For more information on the production and a video sneak peek, please visit thelastshipmusical.com.