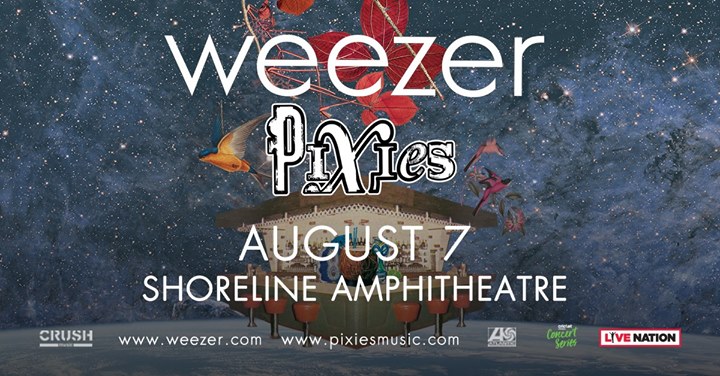 Pixies and Weezer announced back in November of last year a massive, co-headlining seven-week North American tour for summer 2018.  Presented by Live Nation, the tour stops at Shoreline Amphitheatre on August 7, 2018. Though Weezer and Pixies have shared stages in the past, this marks their first full tour together.  Tickets go on sale to the public on Friday, November 10 at 10AM at LiveNation.com. Tickets are $93.00, $67.50 and $47.50 for reserved seats and $33.00 for general admission tickets plus applicable fees. Limited general admission 4-packs will be available while supplies last. For more information visit weezer.com and pixiesmusic.com.

“We’re all big Weezer fans,” said Pixies’ Black Francis, “so we’re really looking forward to this summer.  We have a lot of respect for Weezer, they’re not afraid to take risks with their music.”

The tour comes on the heels of the release of Weezer‘s acclaimed eleventh studio album, Pacific Daydream, this past Friday.  With love from the likes of the New York Times, NPR Music, Q Magazine, and more, as well as a no. 1 Alternative single in the album’s song “Feels Like Summer,” Pacific Daydream is a brilliant addition to the band’s already much-loved discography.  The band celebrated the album’s release with a performance of theirnew single “Happy Hour” on The Late Show with Stephen Colbert earlier this week. Their tour with Pixies will see them playing a mix of new songs and classics from their revered 25-year catalogue, featuring countless chart-topping hits that have made them one of the world’s greatest bands.

Pixies’ live shows are unadulterated magic – simultaneously electrifying and lo-fi with focus on the music with almost no between-song banter.  On this tour, fans can expect 75-minutes of Pixies playing “anything they want,” one song right after the other, chosen from all points of their career, the classics and the new gems.  Artists like Bono, Nirvana’s Kurt Cobain and David Bowie knew what they were saying when they heaped praise on Pixies’ immense influence and rich contribution to music.  This is a band that gives its concert audiences sweet memories of the past while continuing to evolve with relevancy.